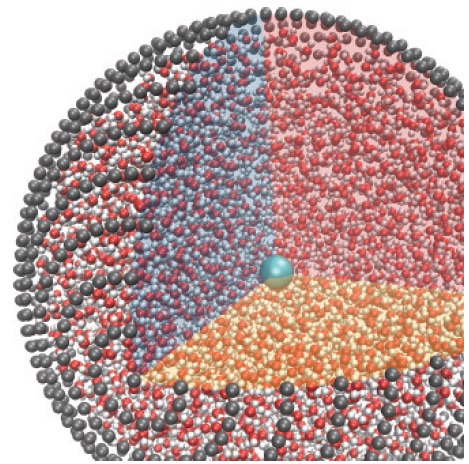 A solvated ion surrounded by water

Using Molecular Dynamics computer simulations we investigate in particular the dielectric properties of such interfacial water. As a representative example, we could recently show that interfacial water in cell membranes absorbs electromagnetic radiation, e.g. from mobile phones, at frequencies very different from bulk water. Deeper physical insight into such phenomena can be gained by relating the dielectric function to the statistical mechanics of the hydrogen bond network in the vicinity of interfaces. 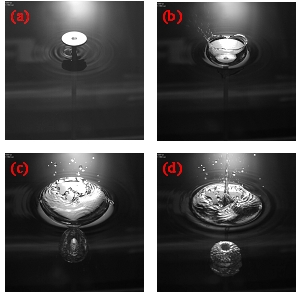 The impact of a disc (a, b) entrains a giant bubble which upon collapse (c) forms a violent jet shooting upwards (d).

A spectacular example of free surface flow is the impact of a solid object on a liquid: At impact a "crown" splash is created and a surface cavity (void) emerges which immediately starts to collapse due to the hydrostatic pressure of the surrounding liquid. Eventually the cavity closes in a single point about halfway down its length and shoots out a fast and extremely slender water jet. Here we impact thin circular discs a few centimeters in radius with velocities of a few meters per second. Combining high-speed imaging with sophisticated boundary-integral simulations we elucidate various aspects of this fascinating process.

Besides the intrinsic interest of understanding such a familiar and immensely frequent phenomenon, impacts can be of enormous practical importance in, for example, climate research: As every day billions of raindrops hit the surface of the ocean, each of them entrains a small air bubble. This constitutes a major mechanism of carbon dioxide exchange between the atmosphere and the sea. In medical physics, scientists are currently seeking ways to use thin liquid jets similar to those created during solid object impact for drug delivery through cell membranes or through a patient's skin. 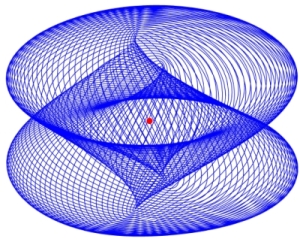 The motion of a classical electron around a proton in external fields follows complex periodic trajectories.

The hydrogen atom in crossed electric and magnetic fields constitutes a paradigmatic example of a near-integrable Hamiltonian dynamical system with three degrees of freedom. The multidimensional phase space of such systems possesses a complex dynamical and geometrical structure which is notoriously difficult to uncover. In this research, we establish a novel method to reconstruct this (partly broken) torus structure by using a large number of easy-to-compute periodic orbits as probes into the intricacies of phase space.

This allows for a semiclassical Einstein-Brillouin-Keller quantization whose spectra show excellent agreement with full quantum-mechanical calculations and experimental data. 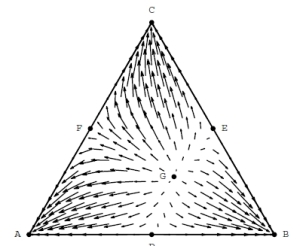 The dynamics of opinion formation is drawn towards one of the fully polarized states (A, B, or C).

Methods of especially statistical physics have found widespread application in the study of economic or social systems. In this project we treat the process of opinion formation within a large group of interacting agents, each agent having one of three possible opinions. We find that - given the proper circumstances - a small, but determined minority opinion can invade the entire population leading to complete polarization in very short times.